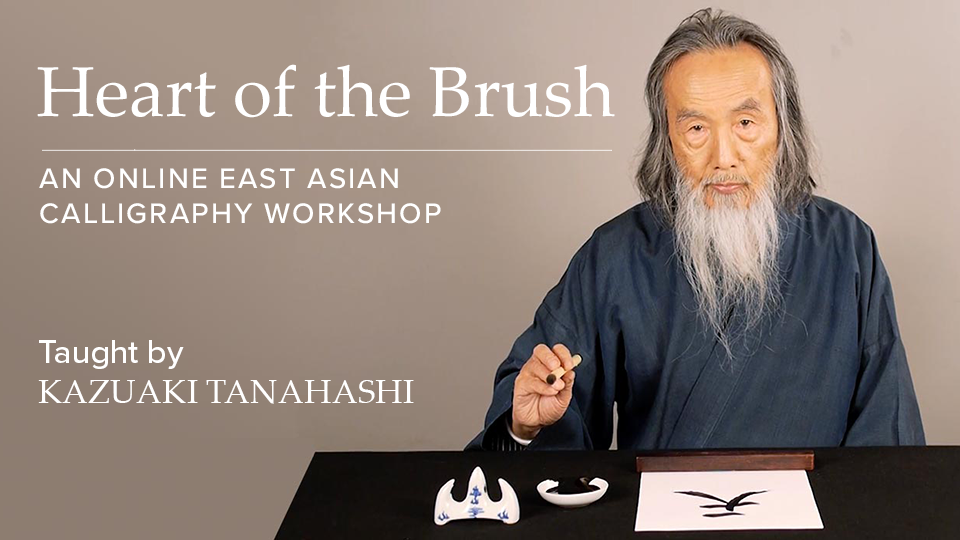 Kazuaki Tanahashi is a renowned calligraphic artist and teacher who works with hundreds of students throughout the world each year. In this online workshop, you can study with him up close, as he guides you in exploring the wondrous world of brush calligraphy.

In each of the eight workshop sessions, Kaz will guide you in making a close study of an ancient Chinese masterpiece. He will demonstrate the character himself and then comment on the work of several of his calligraphy friends to help you deepen your understanding. He ends each session with homework designed to help you cultivate your own calligraphy practice.

You don’t need to have any previous experience of calligraphy or know any East Asian language to take this course. It takes years of practice to be a good calligrapher, but in this workshop and through Kaz’s unique style of teaching, you will experience both a beginning and, at the same time, an advanced study of East Asian calligraphy.

In this course you will:

What You Will Receive

This course was designed with your needs in mind and contains all of the following:

What You Will Learn in Each Lesson

Studying calligraphy is one way to realize how much we have to learn from the wisdom, aesthetics, and depths of our ancestors. In this time of rapid technological advancements, in taking up the brush we become humble and feel privileged to be part of an ancient, creative civilization. In this first lesson of the course, Kaz will explain the materials you need for practicing East Asian calligraphy and show you some basic, standard brush movements.

Beginning a calligraphy practice with the study of ancient master samples, as Kaz does in his book and this course, is unique. It goes counter to the usual way of initially studying the standard brush movements with a manual written by a contemporary master but it is what Kaz has come to know as the ideal approach to East Asian calligraphy. In this lesson, you will explore the five modes of studying an ancient sample, consider the ideal mental approach for practicing East Asian calligraphy, and do a close study of the ideograph “Human.”

East Asian calligraphy is the art of writing characters or ideographs. It took hundreds of years for ideographs to develop in China. As they were gradually standardized, basic strokes were established. In this lesson, you will learn the definition of ideography and gain an understanding of the development of this system of writing and do a close study of the ideograph “Heaven.”

Calligraphy is an experience of space. We experience space in the world and then we create a space within the line. It is two-dimensional lines drawn with a three-dimensional brush movement. In this way, calligraphy is also an art of time. In this lesson, you will examine principles of calligraphy as well as points of appreciation in the three styles, do a close study of the ideograph “Moon,” and practice all three scripts: formal, semi-cursive, and cursive.

In this lesson, you’ll study the ideograph “Eternity.” This character is very important in East Asian calligraphy, because it includes all eight of the most basic movements. In addition to doing a close study of the ideograph “Eternity,” you will learn more about the aesthetics in semi-cursive and cursive scripts and continue to practice all three scripts: formal, semi-cursive, and cursive.

Because anyone can practice calligraphy, people can easily tell attentively drawn lines from those that were mindlessly drawn. To create a piece that many regard as outstanding requires excellence in theme choice, aesthetics, and skill. Thus, calligraphy is a profoundly creative art. In this lesson, you will consider the heart of creativity in calligraphy and learn about seals, techniques for mounting artwork, and other elements on ongoing practice. You will also do a close study of the ideograph “Breath” and continue to practice all three scripts: formal, semi-cursive, and cursive.

The practice of calligraphy teaches us that anyone can be creative. Whether you are a beginner or an advanced calligrapher, you can expand your creativity and enjoy making artwork. In this final lesson of the course, you will do a close study of the ideograph “Way” and continue to practice all three scripts: formal, semi-cursive, and cursive. You will also consider how to apply calligraphy practice to your everyday life.

If for any reason you are not completely satisfied, please e-mail us within 30 days, and we will promptly refund your purchase price.

What Participants Are Saying

“I was so happy to be able to learn from Kaz in this way. It is most helpful to be able to watch his movements again and again. This course is perfect.”

“I enjoyed the way that Kaz related the brush to meditation and daily life.”

“It was perfect...very nice to be able to go at my own pace."

Kazuaki Tanahashi is a renowned calligraphic artist and teacher whose work has been executed and exhibited throughout the world. A peace teacher and environmentalist, he is also the editor of several volumes of the writings of the Zen master Eihei Dogen, including the definitive translation of the Treasury of the True Dharma Eye. His other books include Brush Mind; Sky Above, Great Wind: The Life and Poetry of Zen Master Ryokan; and The Heart Sutra: A Comprehensive Guide to the Classic of Mahayana. 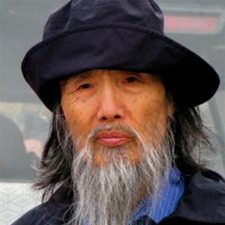